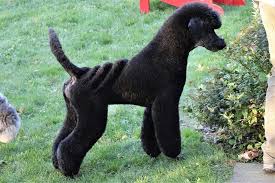 Show Dog Breed Appreciation—Why the Standard Poodle is So Popular

For many people, the mental image of a full-size or “standard” poodle evokes thoughts of pampered white balls of fluff lounging on luxurious ottomans. However, this portrayal of the standard poodle paints an incomplete picture. In contrast to the stereotypes, the standard poodle was originally bred as a hunting animal optimized to track prey throw dense wilderness. In fact, the distinctive multi-faceted haircut of the poodle was developed for function, not for looks. The balls of fur on the joints of the animal keep it warm, while the shaved spots prevent it from getting weighed down while swimming. But the hunting prowess of the standard poodle goes beyond mere appearance.

Intelligence The standard poodle is one of the most intelligent breeds to ever be developed. They exhibit a fiercely creative and loyal personality that makes them excellent show dogs as well as pets. Their intelligence allows them to be trained for almost any conceivable task, whether that be hunting or walking in perfect formation across a dog show ring.

PopularityThe popularity of the standard poodle for dog shows is likely partly due to history, and partly due to their characteristics. The standard poodle is one of the oldest breeds acknowledged by the AKC and many other kennel clubs, so the bloodlines and historical standards are incredibly extensive. Further, their beauty is undeniable. Whether their beautiful coat be white, silver, black, or a multi-colored “party” scheme, there are few sights more impressive than a properly trained standard poodle in a full show-cut.